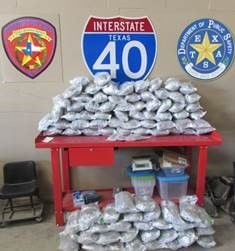 CARSON COUNTY, Texas — Two traffic stops in the Texas Panhandle yielded two arrests and the seizure of cocaine, methamphetamine, and marijuana, according to police.

On Saturday, at approximately 2:51 p.m., a Texas Department of Public Safety trooper stopped a 2016 Dodge Caravan for a traffic violation on eastbound Interstate 40 near Conway, Texas, in Carson County.

The trooper discovered 110 pounds of marijuana in vacuum-sealed packages in the floor and rear cargo area of the vehicle, according to Sergeant Cindy Barkley who estimated the approximate value of the narcotics at $667,000.

The driver, 19-year-old Jason Yang of Westbrook, Minnesota, was arrested and charged with felony possession of marijuana. The marijuana was allegedly being transported from Fresno, California, to Iowa.

On Wednesday, also near Conway, a trooper stopped a 2017 Ford Expedition on eastbound Interstate 40 for a traffic violation. The trooper discovered more than six pounds of methamphetamine and five pounds of cocaine, stated Barkley. The narcotics were valued at approximately $874,000.

The driver, 32-year-old Manuel Vasquez of Tucson, Arizona, was arrested and charged with felony possession of a controlled substance. The narcotics were allegedly being transported from Phoenix to Atlanta.